Episode 4 - Three Mistakes You Need To Stop! – Learn The Secrets Of How Oil Can Be A Game Changer - Genie Nutrition

Episode 5 – Bullet Proof Your Shopping Basket! The Good, The Bad & The Ugly Part 1

Episode 4 – Three Mistakes You Need To Stop! – Learn The Secrets Of How Oil Can Be A Game Changer 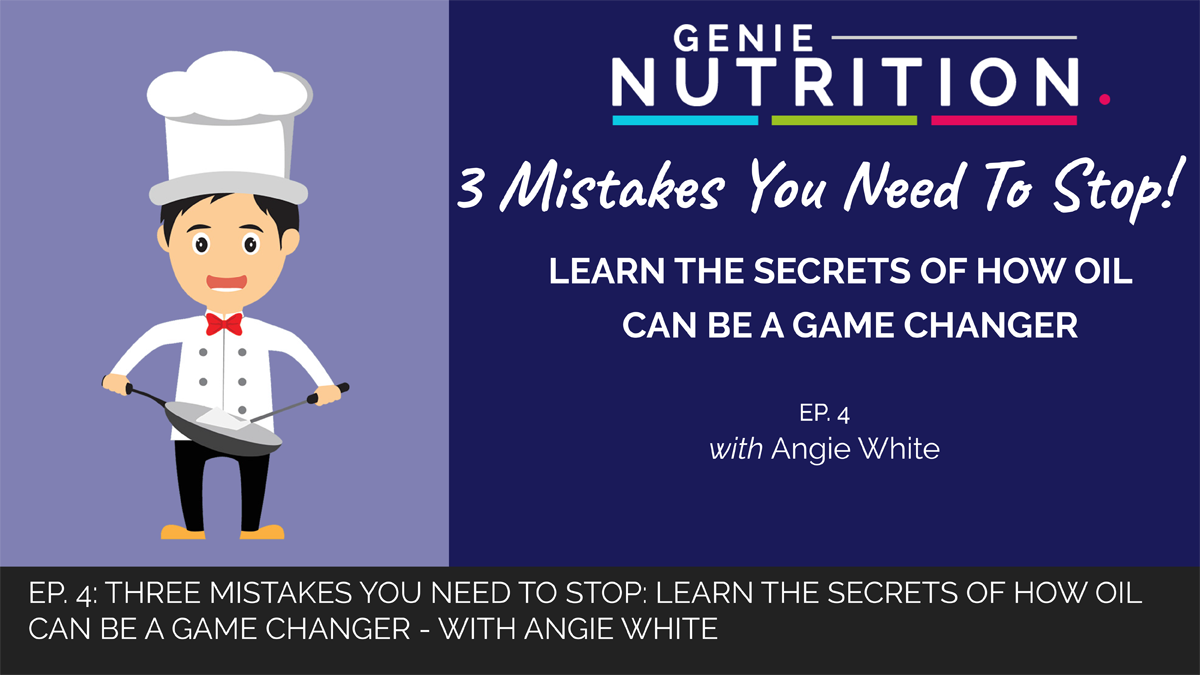 IN THIS EPISODE YOU'LL LEARN

The information contained within this podcast is intended for your general knowledge only and is not a substitute for medical advice or treatment for specific medical conditions. I cannot and do not give medical advice.

The information contained within this document is not intended to take the place of your doctor’s advice nor is it intended to diagnose, treat, cure or prevent any disease. Discuss this information with your own doctor or healthcare provider to determine what is right for you.

You should seek prompt medical care for any specific health issues and consult your doctor before starting a new nutrition regimen.

Welcome back to Genie Nutrition Secrets. My name is Angie White, and I'm a Functional Diagnostic Nutrition practitioner, Health Detective, Biohacking geek, and I really love giving people the tools that they need to take back control of their health. Welcome back to Episode 4.

Last week, we talked about the importance of water, and I gave you my secret trick to getting the most out of the water that you're drinking. If you've jumped right in, it's definitely worth going back and having a listen to last week's episode and the episodes before that. Hopefully, you're going to get a lot of them, and I'd love to hear your feedback. If you'd like to go to http;//genienutrition.com/secret3, you can see all of the show notes and can also leave your comments.

In this week's podcast, however, we are going to be talking about one of my favourite subjects, which is oil! Now, the reason why it's a favourite subject is because, alongside water, it's one of the areas, which can have such a major impact on my clients, friends & family. It's the one thing I will say to people as soon as I meet somebody. If they're having issues with their health, and they've asked me for their help, I will always, always, ask them what oils they're using. We use it all the time. It's in almost all of the foods that we buy that are processed. It's in most of the foods that we cook so it can have such a big impact on our health.

In today's podcast, we're going to talk a bit about different types of oils and three of the mistakes that you could be making. I'm hoping, by the end of today's episode, you're going to be able to make some changes that can have a massive impact, not just on your health, but also on your family and friends' health, because you can spread the word. So let's get stuck in.

What is so bad about vegetable oil? In fact, before we even talk about that, lets talk about different types of oils. You may not be using vegetable oils. Maybe you're using butter. Maybe you're using coconut oil or macadamia nut oil. Who knows… Now, vegetable oil is, in my opinion, completely void of any kind of nutrition. It's made, basically, from extracting the oils from seeds like rapeseed, soybean, corn, sunflower, and safflower. Before the 1900s, it was pretty much non-existent. It was only when the chemical processes that came around in the 1900s that allowed them to be extracted, that's when we started to see all of these processed oils being produced.

Now, the thing is, unlike coconut oil, butter, etc, they can't be extracted by cold pressing or separating by using any kind of natural methods. Instead, they have to be chemically removed, and then they have to be deodorised, and then they have to be altered. It's crazy. They're some of the most chemically-altered foods in our diet, but somehow, they're still being promoted as healthy. It is starting to change slowly. We're starting to see ... In the mainstream, people are acknowledging that these kind of oils aren't great for our health. But I think we need to go further than that. They add absolutely nothing to our health other than inflammation, and issues with toxins, digestive issues and hormone problems. It's just crazy.

Canola oil, just to clarify, because it's a little bit confusing, this is basically a genetically modified version of rapeseed oil. There was a legislation made a few years ago where they basically said you can't call canola oil, rapeseed oil. If you see rapeseed, it's usually the cold-pressed version, whereas canola oil is the genetically modified version, which is the one you want to stay away from.

In my experience, and from the experience of many, many practitioners that I am connected with, you see liver issues, kidney, neurological health complaints, digestive problems, mood issues, fatigue. They can all be massively reduced when these oils are removed, so this really is a massive game changer for people. It's absolutely amazing how much difference it can make just from changing the oils that you're using on a day-to-day basis and, as we've talked about before, avoiding things like processed food, which just naturally have these in them anyway.

I promised you that I would tell you about three mistakes that you could be making. Now, I've already alluded to one of them, but before I do that, in the show notes there's going to be two videos. I really recommend that you take a look. I watched them and, I mean, I've known about this for quite some time, but even watching the videos surprised me. Just have a look. There's one on how butter is made, and then there's one for how canola is made. Now, ignore the beginning of the canola oil video. It basically states how amazing canola oil is for you, which as I've just explained, is absolutely not the case. But that aside, it's a brilliant video, definitely one to watch. I think it kind of reiterates what I've just said about the whole process, so definitely have a look. As I said before, if you'd like to go to the show notes, it's http://genienutrition.com/secret4.

Now, back to the 3 mistakes you could be making:

The first mistake is around the whole thing about saturated fat being evil. I mean, it's been in the press for years. It's been associated with heart disease, strokes, it's just everywhere. People just think that fat and specifically saturated fat, is the worst thing on Earth, and it's just not true. It really isn't. It's absolutely fundamental to our hormone health and stress resilience, people with skin issues. I could go on and on and on.

It's actually a subject that we're going to go into in a future podcast. I really could talk for hours on this, so just want to reiterate the point that saturated fat isn't evil. The source of where we get it from is more important, so it's more important that we're looking at meat from grass-fed animals, that we're getting it from good quality unpasteurised, if possible, dairy. In fact, it's more around the quality of it that I'm worried about than the actual saturated fat itself. That is one of the mistakes you could be making, so stop seeing saturated fat as evil, and fat in general, as evil.

The second mistake, which I was talking about before, is that the vegetable oils and highly-refined seed oils, need to go.
Your task for this week is to have a look in your cupboards and see what highly-processed oils you've got in there. Instead, we want to replace them with:

These are the oils that we should be using on a day-to-day basis. Some of these oils, you can even put them on your skin, so that they can be used for many purposes. I think if you were to just make that one change, you will see some big, big differences to how you look & how you feel. It's just amazing how much difference the quality of fat that you take in, can make.

Mistake 3 – To heat or not to heat

The third mistake that you could be making is around the smoke points. Now, in the resources section in http://genienutrition.com/secret4, you will find a table which lists all of the smoke points of different oils. Oils will go rancid at different temperatures, so some oils are better for cooking at high temperatures, and some oils are not. For example, olive oil. If you buy extra virgin olive oil, which is the majority of what you'll find on the shelves in the supermarkets, those oils shouldn't be cooked with. If you have a good quality extra virgin olive oil, cold-pressed, you don't want to be cooking with that because, if you do, you will ruin the nutritional quality of it, and it burns at a much lower temperature. Keep it for your salads. Pour it on liberally. It's amazing, full of nutrition, but don't cook with it!

The non-extra virgin variety of Olive oil, however (with a lighter colour), that's much better to cook with. It's a bit more difficult to get hold of a good quality olive oil that isn't extra virgin, but go for a glass container. That's usually a good sign because it's unlikely to go rancid. That's a really good example of how you have to be very careful in terms of what ones you're cooking with.

When I cook, I like to cook with either KerryGold butter or coconut oil or sometimes I'll cook with ghee, but mostly it's butter and coconut oil that I'll cook with. That's just to give you an idea for me. Different people like different tastes. You have to find a taste that you like. Some people don't like coconut or are allergic to it, so you just have to find one that's right for you. As I say, I'll give you the list of the smoke points, and you can have a play with those and try them out in your cooking this week.

That's it for this week. Have fun stocking up your cupboards, and watch out for next week's podcast when we're going to be diving into another one of my favourite subjects.

Thank you very much for listening. As always, if you have any comments that you'd like to share or if you have any questions at all, just post them in the comments field, which you can find at http://genienutrition.com/secret4, along with a transcribe of this podcast and links to the videos and the other info we discussed. If you'd like to rate Genie Nutrition Secrets on iTunes, that would be amazing. Have a great week and, remember, fat is your friend, not your enemy!

I am the owner of Genie Nutrition, a Functional Diagnostic Nutrition Practitioner and Health Detective who excels in getting to the root cause of individual’s health issues by using functional lab testing and putting my clients back in the driving seat with a bespoke nutrition and life style program. 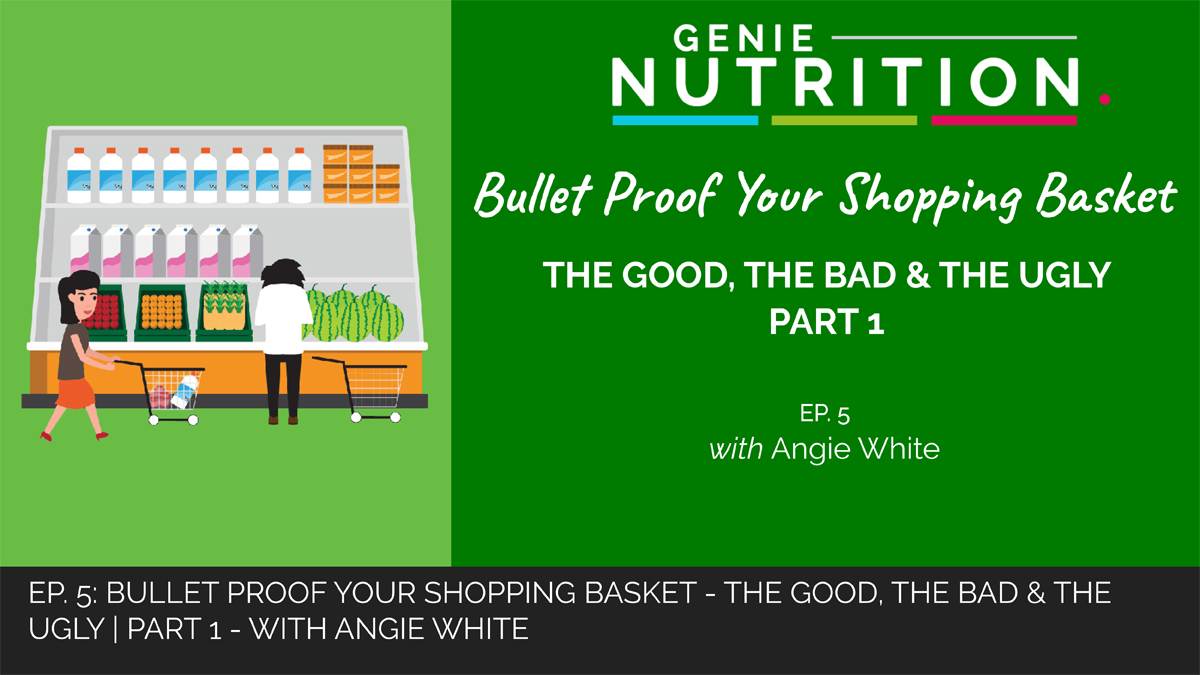 Episode 5 – Bullet Proof Your Shopping Basket! The Good, The Bad & The Ugly Part 1